I recently sat down with Sharyon Culberson—an educator, writer of Catharsis Productions programs: Say What?! and NSFW, performing artist, and social media content creator—to talk candidly about Black History Month from a modern perspective. Here is a portion of our conversation:

Anthony: We all remember the Black History Month of our youth, Mr. Carver invented peanut butter, and Rosa Parks wouldn’t give up her seat, but what should we be talking about today?

Sharyon: Great question!  I’m not even going to attempt to try and list my “favorites” of Black History (there are too many to list here), but I would LOVE to see more teachings of how “Black HIstory” IS US History.  There’s nothing wrong with knowing Mr. Carter created peanut butter, but if you’re allergic to peanuts, you’ve disconnected from his story and stopped caring.  I’d love to see classes discuss the political, social, and cultural influences of these accomplished humans, and show people how we utilize them today in our daily lives.

Anthony: There is debate or discussion about African-American vs. Black American History. What are your thoughts on the differences? Is it a question of nuance or necessity to differentiate the two?

Sharyon: I am an advocate of letting people self-identify, no matter the genre of identity politics.  I have seen myself as both “black” and “African-American,” so I’m open to both or either historical study – my main focus is representation and exposure to the contribution of humans in brown and black bodies in this country.

Anthony: Do companies have an obligation to be talking further about Black History? Who should this education be serving? Employees? Clients?

Sharyon: I think companies have an obligation to serve and reflect both their employees and their client base.  Since both have become more diverse in this day and time (hopefully), I do believe they have a responsibility to acknowledge those that have helped them grow as a company.  I would further be impressed if they acknowledged the black and brown bodies that directly helped build the company through donations or financial support of groups that assist Black people, but if all we can get is a few sections of a newsletter, I’ll take that for now. (shrug)

Anthony: Why did you first think to write NSFW/ Say What?!

Sharyon: I was in the 4th year of touring with Catharsis, which was my 5/6th “edutainment’ gig in my acting career.  I’d found myself working with liberal white people for most of my life—because they had the companies that had funding to pay their actors.  I was able to grow my resume doing something I believed in during the day AND get paid – WIN!  Although I immediately noticed that I was often the only (if not one of 2) black people employed by these companies, and quickly, I realized that I became the “black friend/voice of all black people” to a LOT of my co-workers.   I also started to realize that even with the liberal focuses of these companies (anti-bullying, rape-prevention, autism awareness, etc), many still had a glaring blind spot when it came to racial and socio-economic issues.  I saw a niche available to discuss these topics, but through researching racism, I noticed how similar it was enacted (both systemically and interpersonally) to all of the other “isms” we suffer from in our culture as well.  I hoped NSFW would allow us to see how much we ALL suffer from bias, and help us stop pointing the finger at everyone else and start to change the ONLY person we can control – ourselves.

Anthony: We have mandated sexual harassment/ violence trainings here in Illinois and in other states across the country. Do you think Diversity/Equity/Inclusion is next? Should it be?

Sharyon: YES! Unfortunately, we are in a culture of reactivity – we wait until we “get in trouble” to change certain behaviors we’ve grown comfortable with.  A lack of understanding about diversity/equity/ and inclusion initiatives cause stressful environments for so many, they create pressure cookers instead of creative and productive work environments.  Hopefully, organizations will begin to adopt a more proactive accountability structure which can support their employees and clients in their success, instead of waiting for disaster to strike and scrambling to contain the crises. 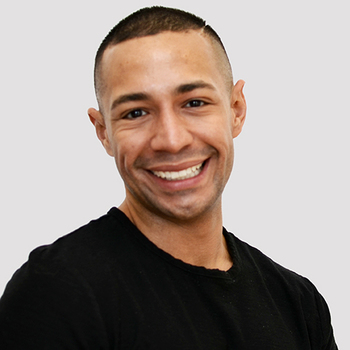 A native of Massachusetts, Anthony moved to Chicago after graduation from Bowdoin College with a B.A. in English and Theatre. Fierce advocate for those who's voices are not heard nearly enough.