In honor of Black History Month, this month we will be featuring blog posts from some of our educators who discuss topics like race, intersectionality, and language and how it intertwines with sexual violence prevention. [Blog 1 out of 6.]

RACISM IS HAPPENING, I THINK,

I work as an educator in sexual violence prevention. I work with Soldiers in basic training. In this training, I portray a character by the name of Aaron Parker. Aaron has been accused of committing sexual assault against a woman named Nikki. I portray that character by telling his side of the story and I try to convince the audience that he did not rape Nikki. He definitely did it and it was completely his fault. Fortunately, most people in the audience can see that fact.

Since I am portraying this role, it stands to reason that some people might see Aaron as black. And maybe this is the cause as to why some people will easily see him as guilty. But maybe this is the reason why some will see him as not guilty.  Are they experiencing the kind of confusion that only racism can create? Do they start to categorize me along with other black men who are accused of sexual assault? Is this one of the reasons why the audience frequently brings up false accusations? People yell out Kobe or Bill Cosby as an example of the “falsely accused.” Some say that black men are often being attacked and targeted because of their success. Some have even asked, “why do we seem to hear so much more about the black people in the news and rarely hear about anyone else?”

I love to educate for reasons like this because my hope is to validate their experience and yet to clear the confusion. The belief that people lie about being victims of sexual assault is already a huge myth in our culture. Then, when a black man is accused of sexual assault, the interpersonal violence against black people throughout history, adds to that myth. And for the black person, it is an agonizing experience to not really know if these moments are racist or if something else is going on. The truth of the matter is, we are in fact experiencing racism, but the racism does not make the accusation false. The racism that we are experiencing is that black people are not the only ones perpetrating this crime. In other words, it is not that we should talk less about black men, but that we should talk more about everyone else.

It is super rare for someone to lie about sexual assault. And so, my hope is that our audiences will learn to trust that the authorities will find the truth, and to just choose to support survivors. I am grateful, as a black educator on sexual violence prevention, that I can empathize with my audiences, and that I can help navigate through the confusion. The kind of confusion that only racism can create. 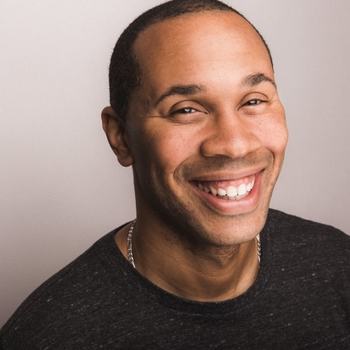 DeRante Parker currently lives in Los Angeles, California. DeRante joined Catharsis Productions in 2009 and received his rape victim advocate training from the RVA of Chicago. DeRante feels blessed and grateful to be part of this organization and to part of this important work.  Every day he looks forward towards serving and educating others on these issues.