2019 had a great start as a historically diverse class of lawmakers were sworn into the House  and Senate on Thursday, January 3, with more than 100 women elected to the congressional body. Today we are sharing with you some inspirational quotes from the newest congress members to help you start your year on a positive note.

“They’ll tell you’re too loud, that you need to wait your turn and ask the right people for permission. Do it anyway”. 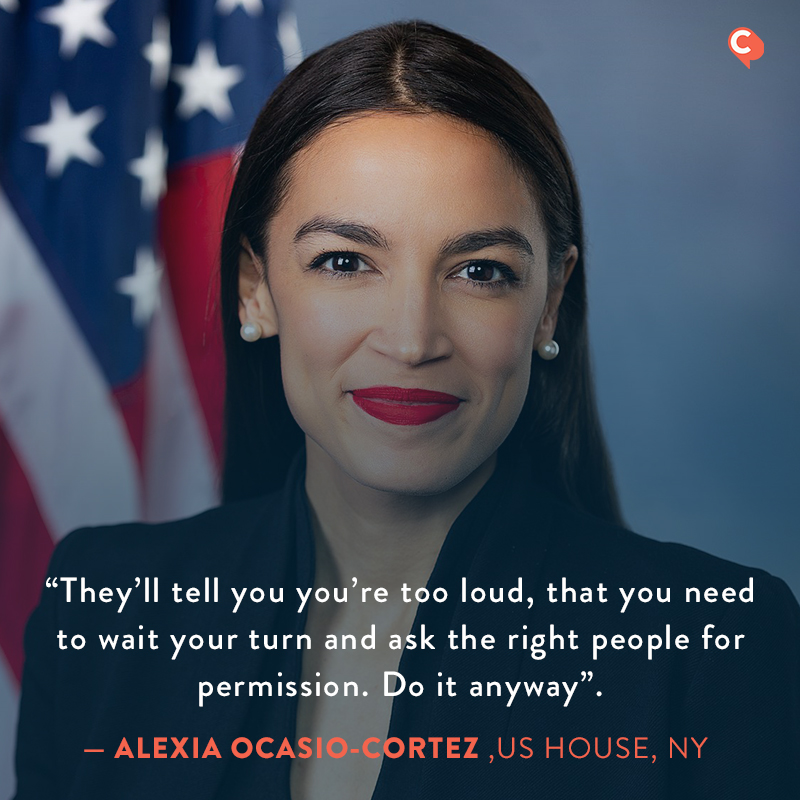 “I feel like I’m at a point in my life where I have a responsibility to speak up for my community. We need someone who will speak to what’s happening in public education, what’s happening on our borders, what’s happening to our organized labor unions—because [of] all these people who work everyday and contribute in our community and feel like they’re left out of the conversation”. 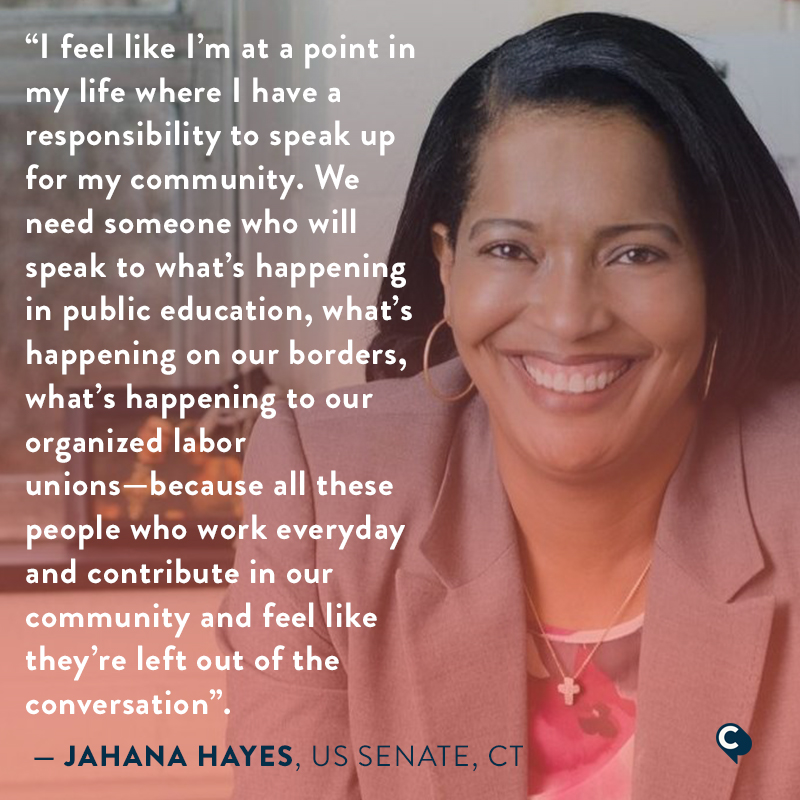 “It’s not good enough to have the marches and the rallies. We’ve got to be at the polls, putting in place the people to help change the culture”. 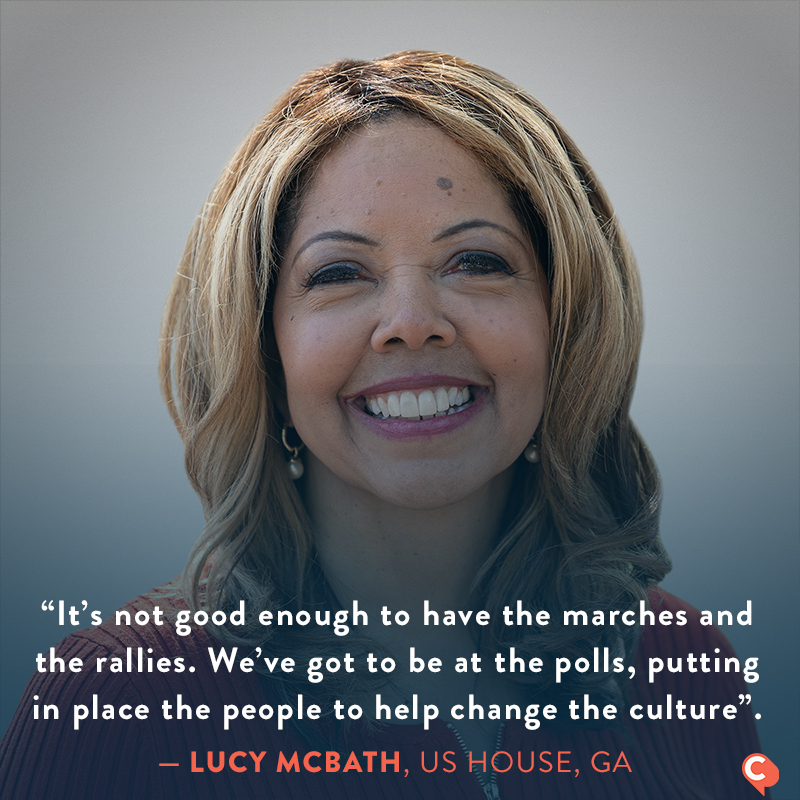 “I was excited and looking for a candidate to support, but as I kept waiting, I thought, ‘What if the person I’m waiting for is me?” 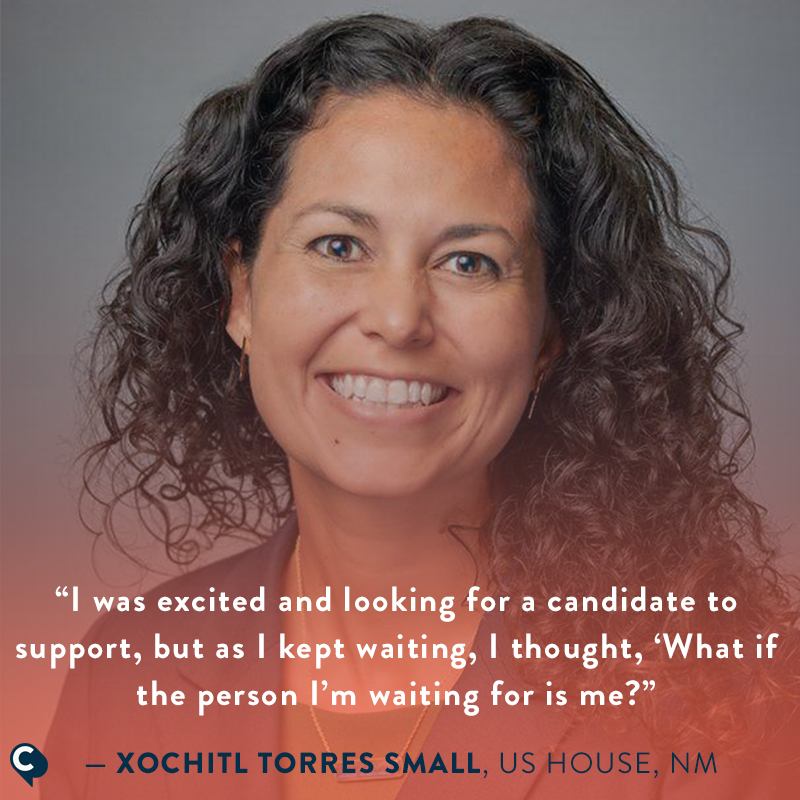 “23 years ago, from a refugee camp in Kenya, my father and I arrived at an airport in Washington DC. Today we return to that same airport on the eve of my swearing in as the first Somali-American in Congress”. 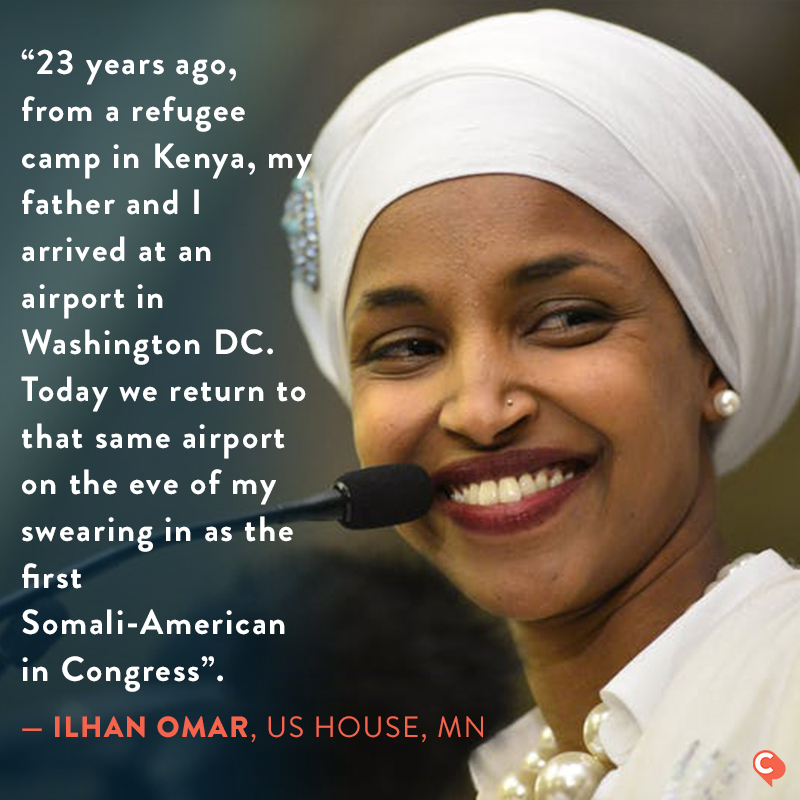 “There’s a great responsibility being part of the forefront of it. I’m in in one of the front-line races. I’m young, I’m a woman, I’m LGBTQ. I’m one of the California seats that’s going to be getting tons and tons of attention and I’m a new face for politics”. 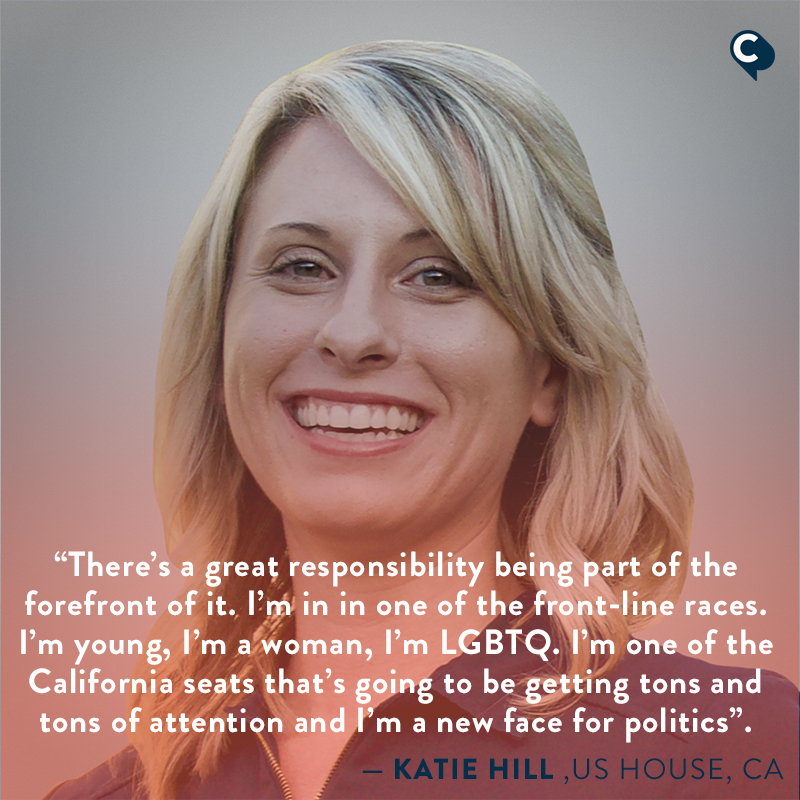 “This election is not about your party registration—it’s about your values and about your beliefs. It’s about the kind of country you want us to be [both] here and abroad, so we’re reaching out to folks no matter how they voted in the past, and we’re asking them to take a hard look at what’s going on in our country and make change”. 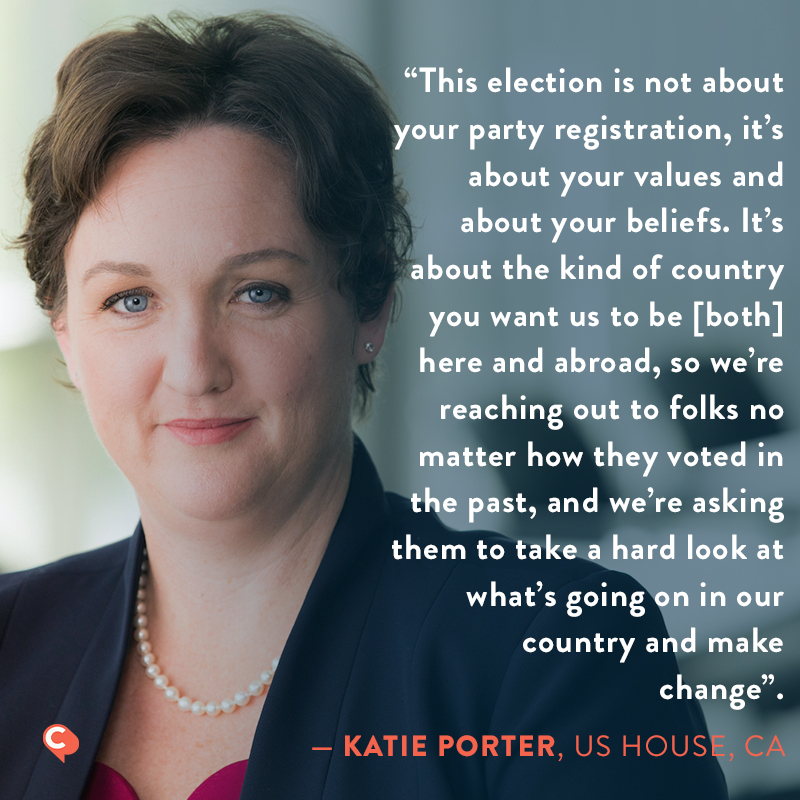 “It’s time for the 14th District to have a representative who works relentlessly for middle class families. We have gone without effective representation for too long”. 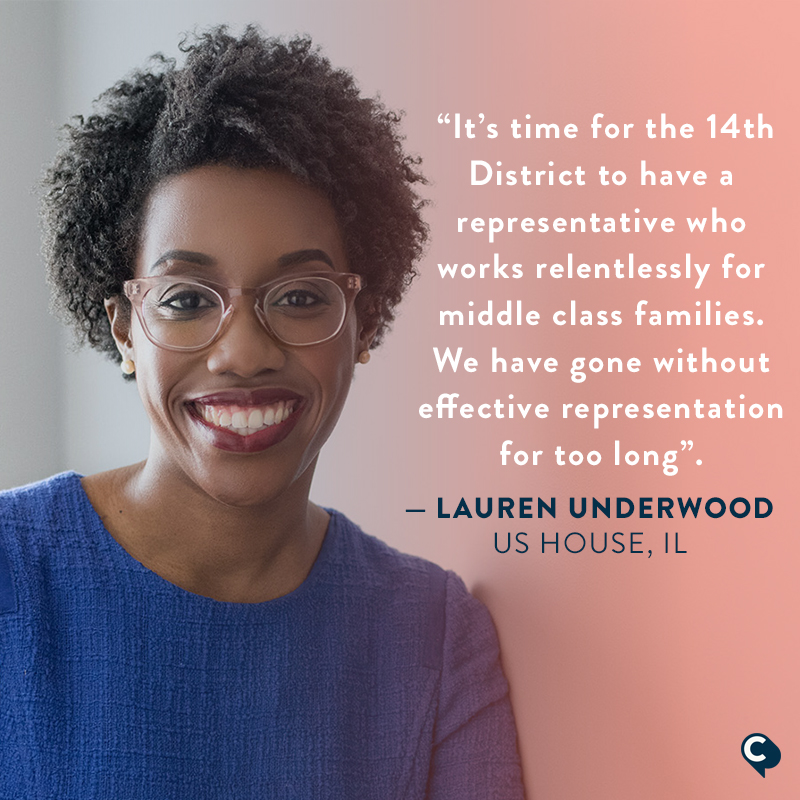 “I think as a member of Congress, showing up to a City Council hearing, to fight back alongside my small businesses, about the unfairness they have to abide by certain ordinances but the bigger developers don’t—that imbalance, the fact that they don’t feel like they are being heard—me being there helps elevate their voice…” 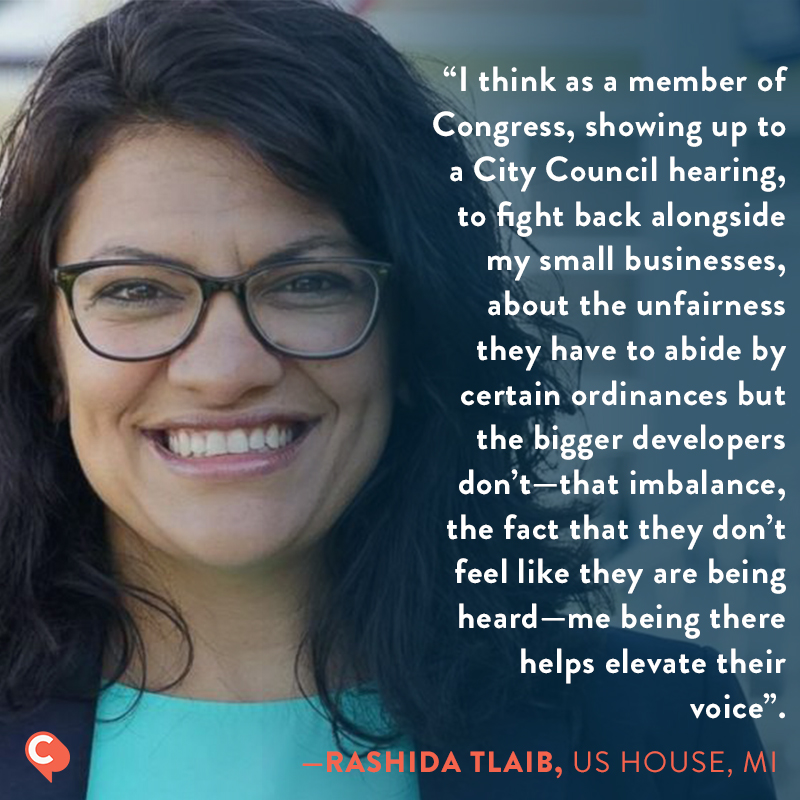 “This really is a critical juncture in American history for all of us: not only Latinos but women, African American, the LGBTQ community. We’re at such a significant crossroads that its almost too much to comprehend. It’s a dark time in American politics. We’re living with a government that is literally working against our communities”. 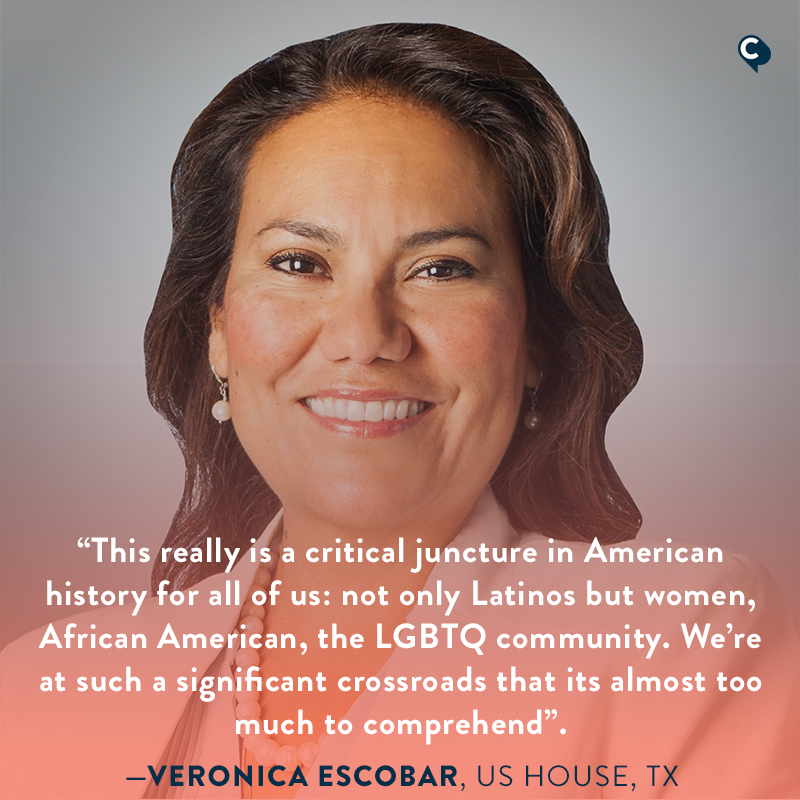 “I think a lot of women realized that democracy is a lot more fragile than any of us wanted to admit. And that the only way we were going to change things would be to get off the sidelines and run ourselves.” 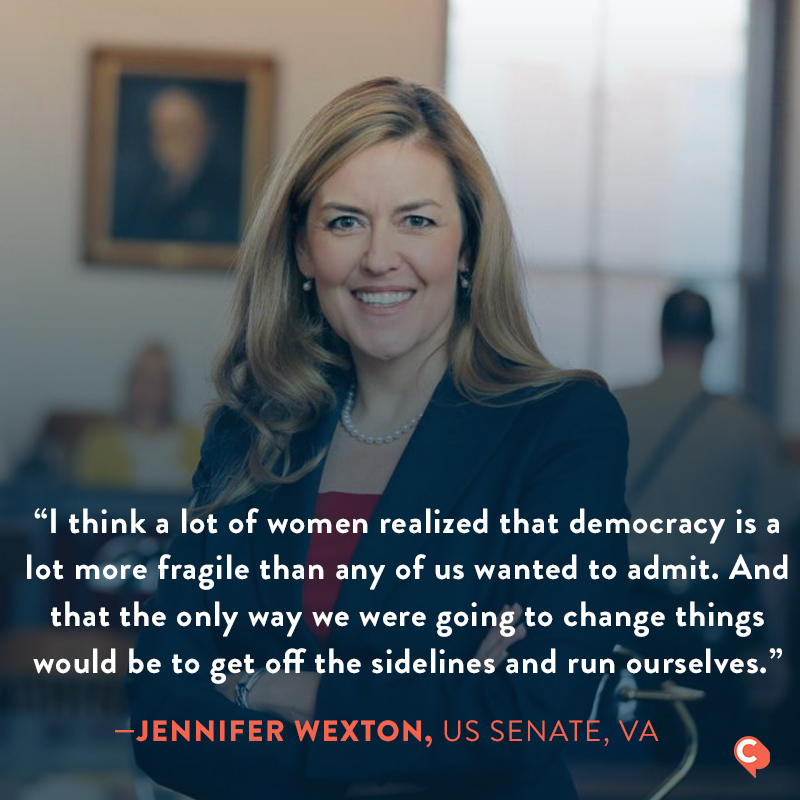 “We should be uncomfortable with the growing gaps in our society, and we cannot allow ourselves to become desensitized to these injustices.” 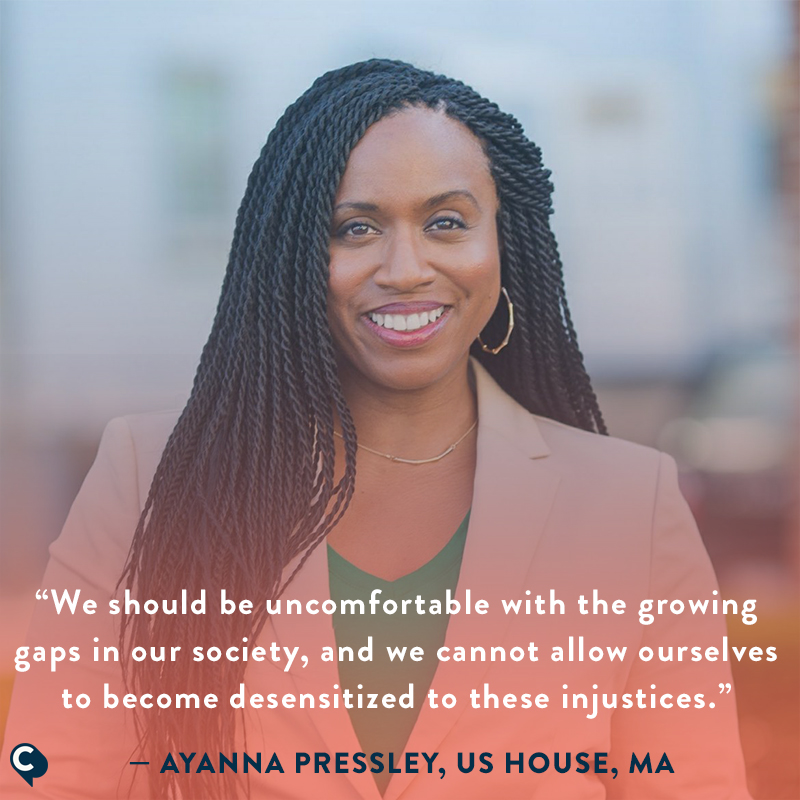 Catharsis Productions' mission is to change the world by producing innovative, accessible and  research-supported programming that challenges oppressive attitudes and shifts behavior.